Wisdom We Can Learn From the Wise Men 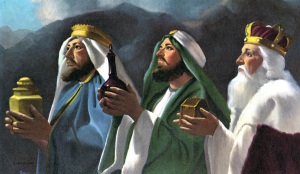 Now after Jesus was born in Bethlehem of Judea in the days of Herod the king, magi from the east arrived in Jerusalem, saying, “Where is He who has been born King of the Jews? For we saw His star in the east and have come to worship Him.” When Herod the king heard this, he was troubled, and all Jerusalem with him. Gathering together all the chief priests and scribes of the people, he inquired of them where the Messiah was to be born. They said to him, “In Bethlehem of Judea; for this is what has been written by the prophet:

‘And you, Bethlehem, land of Judah,
Are by no means least among the leaders of Judah;
For out of you shall come forth a Ruler
Who will shepherd My people Israel.’”

Then Herod secretly called the magi and determined from them the exact time the star appeared. And he sent them to Bethlehem and said, “Go and search carefully for the Child; and when you have found Him, report to me, so that I too may come and worship Him.” After hearing the king, they went their way; and the star, which they had seen in the east, went on before them until it came and stood over the place where the Child was. When they saw the star, they rejoiced exceedingly with great joy. After coming into the house they saw the Child with Mary His mother; and they fell to the ground and worshiped Him. Then, opening their treasures, they presented to Him gifts of gold, frankincense, and myrrh. And having been warned by God in a dream not to return to Herod, the magi left for their own country by another way.

There are a lot of wise cracks about the wise men in the Christmas story. A few of my favorites are…

~ In a Peanuts cartoon, Charlie Brown says to Snoopy who’s perched on top of his dog house, “And the wise men brought gifts of gold, frankincense, and myrrh.” Snoopy sits there thinking, “No puppy?”

~ Two ladies are chatting with coffee cups in hand and one says to the other, “A virgin birth I can believe, but finding three wise men?”

~ When the wise men arrived to find Baby Jesus, they told Joseph and Mary, “Just to be clear, these gifts are for BOTH his birthday and Christmas.”

~ The wise men would have been on time for that first Christmas but they got sidetracked when they heard rumors about a fat guy riding on a sleigh with lots of gifts and went looking for him.

In the Bible, Matthew is the only Gospel writer who mentions the wise men, otherwise known as “the magi,” (more likely, astrologers) who came to worship Jesus after his birth. This is in accord with the main theme of his Gospel—that is, to point out the entitlement of Jesus as King of the Jews in fulfillment of Old Testament prophecy. This is shown by his account that when the wise men arrived in Jerusalem in search of the Christ child, they were inquiring, “Where is he who has been born King of the Jews?”

By the way, unlike what we see in pictures and hear in stories, the wise men didn’t come to the manger upon the birth of Christ. Rather, according Matthew 2:11, it says, “After coming into the house they saw the Child with Mary his mother…” And that’s when they presented the gifts of gold, frankincense, and myrrh, to the young child. At this time, Jesus is believed to be between 1 and 2 years old.

The gifts were expensive and customary for presenting to a person of royalty. Gold was a gift for a king (Psalm 72:15). Frankincense was a fragrant incense that Isaiah envisioned as an offering, that, along with gold, “…will bear good news of the praises of the LORD,” (Isaiah 60:6). Myrrh was a spice and perfume of great value that was used for embalming (Psalm 45:8) which, of course, plays into the death of Christ (Mark 15:23; John 19:39). Interestingly, a major reason for the contention that led to Christ’s death on the cross was because his opposition didn’t understand or accept his future kingly role as Messiah (Luke 23:1-38).

If only the unbelievers of our day would be as wise as the wise men were after Jesus was born. Then, they would turn their hearts toward the only One who can save them and give them the kind of joy felt by those like the wise men when they saw the star (or, perhaps a constellation or alignment of stars as some theorize) pointing them in the direction of Christ: “When they saw the star, they rejoiced exceedingly with great joy.”

What a contrast of their great joy with the evil intentions of King Herod who was only interested in finding out where Christ was born so he could have him killed. He lied, he schemed, he attempted to deceive all because of his fear that a newborn king was going to be a threat to his own power. He is a fitting representation of those who manipulate, ridicule, and destroy all that pertains to good just because of their own selfishness and pride.

When it was learned that Bethlehem was the place to find the Christ child according to prophetic writing (Micah 5:2), the wise men kept on their mission. Their minds were focused on the right place—or, more accurately—the right person, Christ Jesus. They wanted to find the King of the Jews. And so they were looking for the Christ with eyes wide—the way WE must also look for him in our journey of life.

While it’s often debated on whether there were three wise men or not, we don’t really know the exact amount. Just because three gifts were presented to Christ, there’s no actual proof there were three wise men. And even though traditional stories specifically give names to three wise men, the scriptures are silent on this, too. Evidently, if it was important to know how many wise men there were and what their names were, it would be included in the Biblical account.

The more important emphasis should be placed on the wisdom we can learn from them. If we want to be wise like the wise men, there are four things we can learn:

(1) We must look willingly with unfaltering determination. Just like it was with the wise men, our journey is often difficult. At times, the search can get rough, lonely, tiring, and even life-threatening. Aware that Herod could not be trusted, they were wise to listen to God’s warning not to return to Jerusalem. So, “they departed for their own country by another way.”

(2) We must hope expectantly, even though we might face the unexpected. The wise men set out to find the Holy child with great expectations. They were following the star yet not knowing exactly where it would lead. We also have great expectations as we follow our Star, but we do not always know what lies ahead, or where the journey will take us from day to day. We only know that when the time comes for the King to return, all of our hope will be fulfilled when his Kingdom comes. That’s why it’s called “that blessed hope” (Titus 2:13) for it’s what keeps us on our mission.

(3) We must search wisely. We look for signs or indications to how we’re doing. We let the Word of God inspire and instruct us along the way. The wise men wisely followed the prophecy that spoke of the location of Christ’s birth. Whatever the star was, they didn’t just blindly follow it.  Rather, they listened to what God had to say and used his divine guidance and wisdom all along the way. This is wise for us to do, as well (2 Peter 1:19).

(4) We must have a heart to worship. Just think of it: The goal of the wise men was to go to a worship service. They came a long way for it—from as far as Iran or one of the Eastern countries. Would you travel a thousand miles on a camel, no less, to go to a worship service? Would you be willing to offer your precious gifts to the One who would save you and bring everlasting joy into your life? You would, of course, if you yearned to worship the Lord and behold his wonderful, inspiring, beauty and glory. A personal encounter with the Lord awaits every believer who seriously goes to worship the Lord in Spirit and Truth (John 4:23-26). And you are wise to worship him with this kind of attitude. For once you do, like the wise men, you’ll never be same the same again.

As they say, “Wise men (and women) still seek him.” We seek him for the wisdom he provides. It comes by living a lifestyle that brings him honor and praise. It comes by gladly presenting our gifts to him. It comes by applying humility and service out of obedience and love.

The wisdom of the wise speaks out and she cries, “I love those who love me; And those who diligently seek will find me,” (Proverbs 8:17; see also Matthew 7:7-8). This is how we learn wisdom like the wise men displayed.