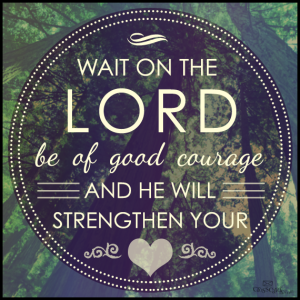 Courage is a special quality that we admire in others. But what about the man in this story…

In the Moscow circus a beautiful woman lion tamer would have a fierce lion come to her meekly, put his paws around her and nuzzle her with affection. The crowd thundered its approval. All except one man in the audience.

“What’s so great about that?” he shouted. “Anybody can do that.”

The ringmaster challenged him. “Would you like to try it?”

The man replied, “Yes. But first get that lion out of the there!”

I imagine many in the audience thought, at first, that the man was very brave to go into the cage and face a lion like that pretty lion tamer. Some may have even thought he was just plain nuts. But when his true intention of entering the cage was made clear, his courage as well as his stupidity raised a lot of doubt.

Courage is not an easy hug. In fact, it’s not easy…period! For courage takes guts. No guts, no courage. A military inductee, when asked if he had any physical defects, replied, “No guts!”

You can see courage demonstrated in living color on TV shows and in the movies. Death-defying feats…running into burning buildings to save the damsel in distress…jumping into a raging river to rescue a drowning child…coming to the aid of an abused dog…saving the world from an invading army….these are picures of courageous heroes going in and saving the day and being praised and rewarded for it.

But there’s just one hitch here. Unless these kind of scenes depict true stories, they’re just make-believe. Hollywood is good at entertaining and trying to make everything look real. And, admittedly, the stunt people do deserve credit for being brave acting out dangerous scenes, risking life and limb doing their work. Now, that’s REAL danger. Which makes the point that REAL courage is what REALLY takes place in the REAL world.

But aside from the action type of stories we usually associate with courage, there’s another side of it that I dare say few often consider. What about moral courage? What about the courage to say “no” to something wrong or potentially harmful while everyone else is saying, “yes, that’s okay.”? How about the courage to walk away from a dangerous dare? Doesn’t it take true courage to speak the truth even if the crowd questions it and even mocks you for believing it? It’s not always easy to take a stand against an injustice done to someone, or to resist a bully, or to love someone who is difficult to love. But that’s when you really need real, genuine courage.

I agree with the statement, “Courage is the quality it takes to look at yourself with candor, your adversaries with kindness, and your setbacks with serenity.” Such quality is admirable. It’s worthy to be applied. And it’s what we’d expect to find in Christians.

Just turn to the Scriptures and you’ll find many passages that describe the source of courage, the ethics of courage, and the reward of courage. From the following list of Bible references (New American Standard Bible, NASB) on courage, I am going to place a blue (S) for source, a green (C) for conditions, and a gray (R) for result to convey how we are encouraged by applying it.

Joshua 1:9-11 “Have I not commanded you? Be strong and courageous! (C) Do not tremble or be dismayed, for (S) the Lord your God is with you wherever you go.” Then Joshua commanded the officers of the people, saying, (C) “Pass through the midst of the camp and (C) command the people, saying, ‘Prepare provisions for yourselves, for within three days you are to cross this Jordan, (R) to go in to possess the land (S) which the Lord your God is giving you, (R) to possess it.’”

1 Chronicles 28:20 “Then David said to his son Solomon, ‘Be strong and courageous, (C) and act; (C) do not fear nor be dismayed, (S) for the Lord God, my God, is with you. (S) He will not fail you nor forsake you until (R) all the work for the service of the house of the Lord is finished.’”

Acts 4:13, 31 “Now as they observed the confidence [boldness] of Peter and John and understood that they were uneducated and untrained men, (R) they were amazed, and (R) began to recognize them as (S) having been with Jesus….And (C) when they had prayed, (R) the place where they had gathered together was shaken, and they were all (S) filled with the Holy Spirit and (R) began to speak the word of God with boldness.”

Ephesians 3:11-13 “This was in accordance with (S) the eternal purpose which He carried out in Christ Jesus our Lord, in whom we have boldness and confident access (C) through faith in Him. Therefore I ask you (C) not to lose heart at my tribulations on your behalf, for (R) they are your glory.”

Hebrews 4:14-16 “Therefore, since we have (S) a great high priest who has passed through the heavens, Jesus the Son of God, (C) let us hold fast our confession. For we do not have a high priest who cannot sympathize with our weaknesses, but (S) One who has been tempted in all things as we are, yet without sin. Therefore (C) let us draw near with confidence [boldness] to the throne of grace, so that (R) we may receive mercy and find grace to help in time of need.”

These, and many more passages I could list, encourage us to take courage. The source of courage is not from human will or power but from God through Jesus Christ, his Son. When we apply the conditions upon which we exercise courage, then we can expect great results.

Some, however, might think we’re a little crazy for stepping into the cage to face the fierce nature of opposition and intimidation and danger. But even in the midst of fear, we can take courage. Why? Because we know the One who will help us and guide us through whatever circumstance we are in.

God wants us to take courage. He wants to reward us for it. The reward of eternal life is waiting for those who have the courage to love him, trust him, worship him, and serve him through his beloved Son. (1 John 5:13-15).

We need not be discouraged or dismayed whenever we take courage in the Lord. For God will take of YOU! Here’s the hymn under the same title, “God Will Take Care of You”: http://youtu.be/MdZ7RdF07Eo