Will Robots Rule the World? 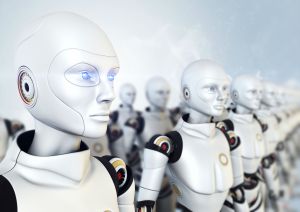 The year is 2035. Detective Del Spooner is sent to an experimental space station to investigate the death of brilliant, eccentric scientist Dr. Alfred Lanning. Spooner is aided by psychologist Dr. Susan Calvin, and the death is initially labeled a suicide. Spooner, though, suspects that a robot may have perpetrated the crime. That seems unthinkable since robots are governed by The Three Laws of Robotics, which state that a robot may never harm or allow harm to come to a human being. As Spooner and Calvin investigate the death, they come to believe that a robot did, in fact, commit the crime. They are aided in their investigation by Dr. Lanning himself, who appears as a hologram, and reveals that he was working on a top secret project at the time of his death. (Plot summary of the film, “I, Robot,” bing.com)

This 2004 science fiction futuristic film directed by Alex Proyas, and starring Will Smith, is all about the potential of robots to usurp power over humans. While this is science fiction, there appears to be the fear that robots really could takeover the world someday. It may not occur in such a dramatic way as the movie portrays. But there is growing concern that robots will play a significant role toward replacing humans in the not-too-distant future.

Headlines of recent on-line articles include, “When robots take over, will there be jobs left for us?”; “Robots could take over 38% of US jobs within about 15 years, report says”; and “More than 70% of US fears robots taking over our lives, survey finds,”  (theguardian.com)

According to the article of that last headline, it is reported that,

“Ordinary Americans are very wary and concerned about the growing trend in automation and place a lot of value in human decision-making,” said Aaron Smith, the author of the research, which surveyed more than 4,000 US adults. “They are not incredibly excited about machines taking over those responsibilities.”

The article cites a Pew Research survey that indicates four scenarios which have wide-reaching implications in relation to technological advancement: (1) driverless cars; (2) machines replacing human jobs; (3) autonomous robot caregivers; and (4) a computer program that could evaluate and select job candidates without any human oversight. (ibid.)

The report continues to say,

“According to the findings, 72% of Americans are very or somewhat worried about a future where robots and computers are capable of performing many human jobs – more than double the 33% of people who were enthusiastic about the prospect. Seventy-six per cent are concerned that automation of jobs will exacerbate economic inequality and a similar share (75%) anticipate that the economy will not create many new, better-paying jobs for those human workers who lose their jobs to machines.”

The fear that robots could takeover humanity someday is real. In fact, there are those who believe that, down the road, robots will go way beyond their menial tasks to the point of destroying human existence. There is one headline that reads, “Robots could wipe out the human race, expert says,” (networkworld.com). In the article written by Patrick Nelson (4/27/15), Dr. Stuart Armstrong, of Oxford’s Future of Humanity Institute, reportedly predicts that Artificial General Intelligence (AGI) programmed into robots could lead to the mass killings of humans. In what DOES sound like science fiction, Armstrong asserts that due to the “super-speed” of robots over human ability to perform tasks, a day could come when they overpower humans.

“The threat from artificial intelligence is “not just a Hollywood fantasy,” Patrick Sawer says, writing in the Telegraph newspaper.

“Another issue with robots, the Telegraph says, is that as the machines harness huge amounts of computing power they will eventually create global networks with each other. They’ll communicate without human interference, and that could be a problem. They could start making decisions among each other.”

Pondering these dire predictions in view of the scriptures, we can find comfort and assurance that robots will not takeover the world (Rom. 8:38-39; Ephesians 3:12; 1 John 5:12-13). True, as long as the Lord tarries, humanity could produce some amazing technology by developing the use of robots. Over the past decade, for example, robot technology has become very instrumental in improving transportation, developing artificial body parts, providing safety and rescue, and advancing scientific research. Who knows how robots could make life better in the years to come?

In his model prayer, Jesus included, “Thy kingdom come, thy will be done on earth as it is in heaven,” (Matthew 6:10). When he entered his ministry on earth, the Bible says that Jesus began to preach saying, “The time is fulfilled, and the kingdom of God is at hand: repent ye, and believe the gospel,” (Mark 1:15). The gospel is the Good News that the future is in the hands of God through his Son. This rules out robots. Christ will rule the world someday, not robots. And we who are in Christ will be co-rulers with him. Those who repent of their sin and receive Christ as Lord and Savior, have the hope of inheriting the Kingdom of God and receiving eternal life in the age to come (Daniel 7:27; Mark 10:30; John 3:16; Romans 6:22; 8:17; 1 Thessalonians 4:16-18; Revelation 5:10). How marvelous are the promises of God!